John Scalzi kicks off his new space opera series with a mutiny, gun running and the potential of space pirates. There is also plenty of exposition about hyperspace lanes known as the Flow but delivered with such verve that it is a joy to read. The mix of high concept science fiction and a slightly tongue in cheek tone should come as no surprise from the author who gave us both the Old Man’s War series and the award winning Redshirts.

Scalzi is not backwards in building his universe from some fairly common tropes – there is an empire ruled by an emperox who is also head of the church and the most powerful trading guild, there are noble families, mainly also connected with trading guilds, and arcane trade relationships. The empire itself, known as the Interdependency is a bunch of planets that can only exist by relying on trade with each other facilitated by the mysterious and not well understood Flow lanes. But the Flow is breaking down, potentially isolating and condemning to failure, all of the interdependent outposts of the Empire. So that even before his scenario is fully understood, Scalzi has started to tear it all apart to see how it ticks.

The Collapsing Empire has everything you could want in a modern space opera – vivid characters, snappy, sometimes in-your-face, dialogue, well written action scenes, political manoeuvring and a little bit of social commentary.  But in the end it feels like an enjoyable but lengthy prologue. By the time the epilogue rolls around the universe has been generally described, the main players are established and the immediate problems that they will have to face are clear (and in cliffhanger fashion seem insurmountable). Scalzi himself has said that he does not know whether there will be one more book or two in this series but fans of this slightly irreverent style of science fiction will take whatever they can get. 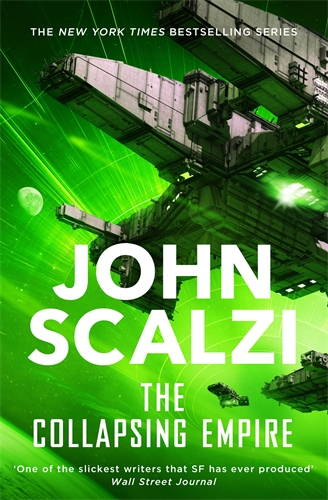