Natasha Pulley burst onto the fantasy scene last year with her stunning debut The Watchmaker of Filigree Street. This slightly steampunk tale of Victorian London was full of charm and whimsy but also beautifully observed, historically fascinating and populated with interesting characters. Now she follows this up with The Bedlam Stacks, and while one character from Filigree Street, at least, makes a brief appearance, no familiarity with that book is required. In fact The Bedlam Stacks, while in some ways initially resembling its predecessor and  a kind of prequel to it, turns out to be a very different beast.

It is the 1850s and the East India Company is desperately trying to find a reliable source of quinine to treat malaria. The Peruvians have a monopoly on the cinchona tree, the bark of which is used to produce quinine. Numerous expeditions to the Peruvian interior have failed to bring back viable cuttings of the plant. The company approaches Merrick Tremayne to lead an expedition into the Peruvian interior. Tremayne is a former employee injured in the opium trade and has family connections to Peru through both his father and grandfather. He is to be accompanied by his old naval colleague Clements Markham. Together they are:

“… being sent to steal a plant whose exact location nobody knows, in territory now defended by quinine barons under the protection of the government, and inhabited by tribal Indians who also hate foreigners and have killed everyone who’s got close in the last ten years.”

But things are slightly weird even before Tremayne sets out. He thinks that he sees a statue that his father brought back from Peru move, and a tree, transplanted from the area that he is going to, explodes, taking out part of the family estate. Neither is a coincidence and both will come back to influence the story.

There have been plenty of books of Victorian-era expeditions into the unknown and the cultural mismatch that occurs, but The Bedlam Stacks is something different. By the time Tremayne and Markham reach the tiny Peruvian town of Bedlam, formerly New Bethlehem, the town where Tremayne’s father was born, things have become more than a little surreal. Bedlam itself sits on  top of a number of giant, blue-obsidian glass stacks that magnify light and heat the water in the river below. It is populated by people rejected by the tribes that live on the other side of an uncrossable salt line, and watched over by a series of moving statues called markayuq. The town is lit by lamps using a combination of clockwork and a local pollen that glows when agitated.

The two explorers are accompanied on their quest by Raphael, a man with secrets, who may or may not have been sent to kill them. Raphael turns out to be the priest of Bedlam and the three men stay at the church while they wait to find a way to access the cinchona trees. And there is a rich religious vein in this book as a result, for example:

I’d always through it was gaudy, but standing there watching him beside the gold and glass shrine, I realised that this was a candlelight faith. It didn’t work in the clear unforgiving light in London or Scandinavia, where even the dust in the cathedrals showed … England’s was a reading religion, one it was difficult to understand at the bleak unimpressive first glance, one that needed books to explain itself. But his was images and images, the same as the old stages, in a place where not everyone could read and good light was expensive.

The markayuq, moving stone guardians of the village and the surrounding forest, are the centre of the area’s cosmology. At first the two men believe that the statues work by a form of ancient clockwork but soon find the truth to be very different:

“It’s alive, the markayuq are alive, the creation story is that people were made of rock, not clay; it’s all the same thing. Stone lives.”

The story comes to focus on the relationship between Tremayne and Raphael, two men from very different worlds who find a common understanding. Raphael seems to change as the story goes on but it is more through Tremayne peeling back his layers than any inconsistency in his character.

As with The Watchmaker of Filigree Street, the revelations come slowly and organically so that as the story becomes increasingly surreal readers are already well invested and willing to go with the flow. But Pulley moves away from the clockwork and gears of Filigree Street and dives even deeper into the human condition. The Bedlam Stacks breathes some much-needed life into some well-worn tropes and turns out to be an adventure full of wonder and discovery. This is once again top-notch and highly original British fantasy. 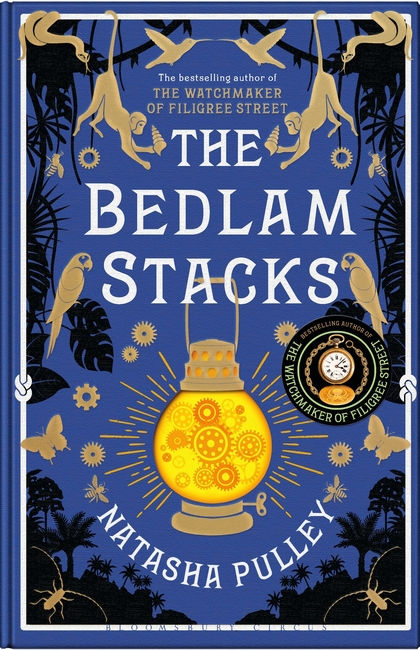