There have not traditionally been many science fiction novels set in the developing world. This is starting to change with authors like Nnedi Okarofor, Ian McDonald and Paolo Bacigalupi. Joining them now is Australian author Shankari Chandran whose new science fiction novel The Barrier is set mainly in a post world war Sri Lanka. This is Chandran’s second novel, her first was also set in Sri Lanka, a country starting to feature more in Australian fiction such as the Rajith Savandasa’s recent debut Ruins.

In 2040, the world is fifteen years on from a global religious war and Ebola pandemic which between them decimated populations and redrew the political map. The world is now divided into two sections – a Western Alliance and an Eastern Alliance. The sides are strictly divided with little travel or information flowing over the border. Both sides maintain strict vaccination protocols that prevent the resurgence of new strains of Ebola, but all of the vaccine comes from the West. It becomes apparent early on that the vaccine being used in the East is slightly different from that in the West, designed to prevent a re-emergence of the “sixth plague” – religion. The Eastern vaccine contains an extra strand that destroys that part of the brain associated with faith and together with a state-supported destructive rampage at the end of the war has eradicated religion from the countries of the Eastern Alliance.

When a group of rogue vaccinators is discovered spreading a variant of the vaccine that does not have the faith inhibitor, Noah Williams and his team are sent in to investigate. Their main suspect is a Sri Lankan virologist and the team head to that country under cover to check him out. Only things do not turn out to be as simple as they believe, larger agendas are playing out around them, putting Noah and his team in danger.

There is plenty to like about this story. The setup is intriguing and for tech heads there is plenty of science talk. Noah is not only a scientist, he is also a soldier and a torturer who is both on the giving and receiving end. Chandran brings a level of realism to the torture scenes (there are a couple and not for the squeamish) and handles the action scenes well.

Some of the set up does not bear too detailed consideration – the East/West divide is a little simplistic and the underlying corporate conspiracy, when it is revealed, feels a little clichéd as do the characters of those behind it. But this is not just a science fiction action thriller. At times it feels more like a thought experiment as Chandran uses her sandbox to investigate deeper philosophical issues around religion and faith and the role these play in human society and development. She uses the Hindu faith which still bubbles beneath the surface of this future Sri Lankan society despite attempts to wipe its memory from the people and landscape. And she seems to imply that the human organism might fight back against an attempt to wipe faith out, that faith is in some way inherent.

There are plenty of post-apocalyptic dystopias around at the moment which, while futuristic are trying to come to terms with very real and very current issues. The Barrier provides a way to explore the world of totalitarianism, religious extremism and sectarian conflict in a relatively safe speculative space. But very little is safe in Chandran’s world, and she manages to say some interesting things in the context of what is often a visceral and fast paced thriller.

The Barrier by Shankari Chandran

The Barrier by Shankari Chandran 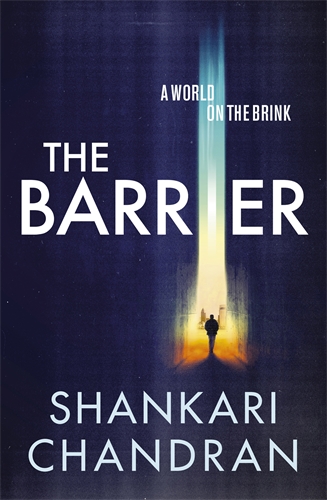