Take Back the Sky is the third and final volume in Greg Bear’s military science fiction series which started with War Dogs and continued in Killing Titan. As a result this review cannot help but contain some spoilers for those books, even if they are kept at a minimum. So readers beware.

Take Back the Sky opens minutes after the cliffhanger ending of Killing Titan. Trapped beneath the surface of Titan, narrator and grunt Michael Venn and his group of Skyrines (space marines) have changed sides in their ongoing war and are now under attack from their own forces. That war they have learnt, encouraged by the mysterious Gurus against the bird-like Antagonists, is a fraud. They have now been rescued by a group of Antags who have taken control of a bizarre Guru spacecraft with a view to using it to return to their home planet.

Take Back the Sky is big idea science fiction dressed up as military scifi. From the Antag culture, to the bizarre interior of the Guru ship which also reveals horrific aspects of design, to the discovery of the real reason why the Gurus came to Earth in the first place. And big idea science fiction is something that Greg Bear has always excelled at and which has seen him consistently nominated for the top international science fiction awards.

Take Back the Sky suffers less from some of the problems of the previous two novels. Venn has always been a grunt, going where he is told and fighting who he was told to fight. By telling the story through his eyes it was sometimes difficult for Bear to give a broader view of the conflict. In the concluding volume, Venn has particular power, more status among his peers and more agency, at one point bemused by the fact that he is effectively ordering his commanding officer around. As a result he becomes a much more active player in shaping his own destiny and his narration is right in the middle of the decision making and action.

As with its preceding volumes, the style of Take Back the Sky can take some getting used to. But it is true to the character and the military culture that Bear is seeking to portray. There is plenty of action, almost too much weirdness, some poignancy and the big questions posed in the earlier books are answered. Take Back the Sky is a successful conclusion to a science fiction trilogy which took standard military scifi and gave it a much needed upgrade. 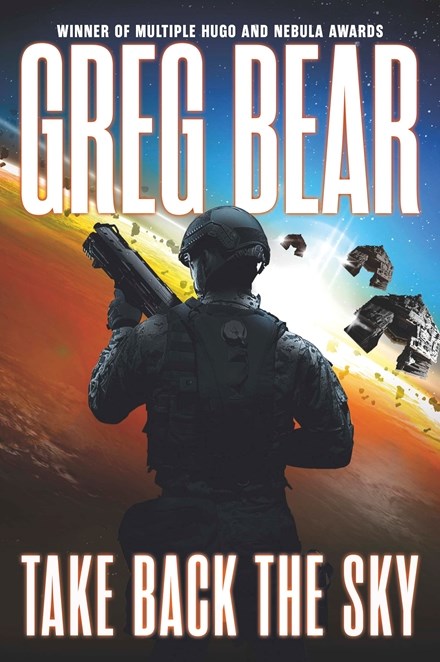