Kathryn Heyman never hides the fact that Storm and Grace is a tragedy. From the opening pages she manages to instill a feeling of dread. And if the text is not hint enough, a literal Greek chorus – “We are here. We will not leave.” – who reappear at times through the narrative should be another tip off.

Grace, a young woman studying for a marine science degree is swept off her feet by “The Deepest Man in the World”. She is sent to interview world famous free diver Storm Hisray, for a diving magazine and the sparks fly from the first meeting. Storm is a charismatic force and before long he has convinced Grace to abandon her life in Sydney and come to live with him and his crew on a Pacific Island, supporting his attempt to break another world record for freediving. Not long after that Storm starts training her to become a freediver herself, using her desire to be close to him in order to challenge another female freediver.

From Grace’s perspective, her story has all the hallmarks of a romance novel. She finds herself, falling into the role of the heroine of her own story, encouraged by Storm, a man with significant persuasive powers. Despite all of the gentle and not so gentle warnings, she falls deeper and deeper into the relationship, reshaping her desires so that they fit what Storm expects, explaining away his petulance, jealousy and violent temper. And she is not the only one pulled along in the wake of Storm’s narcissistic personality. And all the time, the Greek chorus is there, made up of women wronged and abused, presaging tragedy.

Storm and Grace is built around the sport of freediving – the pursuit of depth without any breathing apparatus. It is portrayed as a pursuit of the mind as much as the body – “where the mind goes the body will follow” is one of Storm’s mantras. Heyman’s descriptions of freediving and of being in the ocean are a highlight. And she uses this pursuit as an extended metaphor around which much of the plot is drawn. Much like Sam Carmody’s recent book The Windy Season, most characters and situations are at some point likened to the sea and the call of the depths.

Somewhere along the line, the lies start to come away and Storm and Grace reveals itself as a novel about obsession, addiction and danger. Heyman manages to effectively build the tension despite having presaged the tragedy. So that as a reader you may feel a little like the Greek chorus of the novel, shouting out the danger but always failing to be heard, drowned out by the dazzle of the sea or the call of the deep.

Storm and Grace by Kathryn Heyman

Storm and Grace by Kathryn Heyman 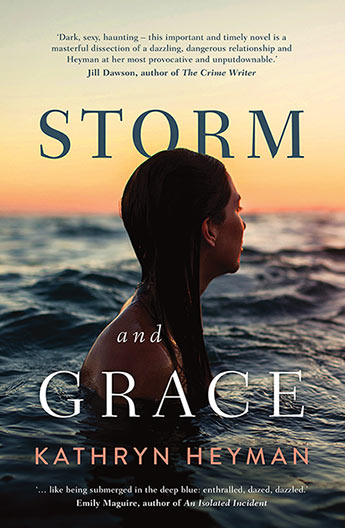