Post-apocalypses now come in may flavours. One of those is the robopocalypse. Man builds robots, robots become sentient, man tries to reign in robot sentience, robots revolt. Whether or not the robots win tends to often be the point. Think Terminator for a good example of this trope. And actually, Terminator is a good analogy for the milieu of C Robert Cargill’s Sea of Rust, although instead of Skynet there are a bunch of artificially intelligent overlords, making things a little more chaotic. The other difference is that Sea of Rust is post-human, set in an age 30 years on from the death of the last human and only robots walk the Earth. So there is no human resistance to worry about. But as with animal evolution, these robots seem to have developed into every human-type of evolutionary niche.

Sea of Rust opens with Brittle, a Caregiver model, eking out an existence in the badlands. Brittle is a scavenger, finding other robots on the edge of death, talking them into shutting down with the faint hope of salvation, and then stripping them for parts. She (yes, robots have gender in this world), operates in and around the Sea of Rust, a giant desert scrapyard left following the detonation of an electromagnetic pulse in the early days of the robot-human war:

Now nothing more than a graveyard where machines go to die … littered with rusting monoliths, shattered cities, and crumbling pieces of industry … Here asphalt cracks in the sun; paint blisters off metal; sparse weeds sprout from the ruin. But nothing thrives … Wrecks litter the highways, peer down from the tops of buildings, from out windows, lie naked and corroded in parking lots, heads split open, wires torn out, cables, gears, and hydraulics dripping into the streets.

So far, so post-apocalyptic. But Brittle has troubles of her own. Caregivers are a rare model of robot, becoming rarer every day, and while on the lookout for parts for herself she also has to deal with scavengers after her own parts.

The post-human world is not simple even for the robot survivors of the war. After the humans were all wiped out, the giant artificial intelligences, called One World Intelligences (OWIs), which started the war, then went to war with each other. Part of the OWI strategy is to build their forces by gathering and absorbing individual robot intelligences into themselves. Each OWI wants to be the only one. And so war has been a constant with the robot survivors, those not willing to submit themselves to a global mind, constantly on the move, many eking out an existence on the edges of the Sea of Rust.

After one such OWI-inspired attack Brittle falls in with a group of travellers who claim they have a way of ending this war. Together with a band of misfits, including her nemesis Mercer, Brittle must got back across the Sea of Rust while pursued by an implacable army controlled by one of the last OWIs.

Despite all of the action, the first half of Sea of Rust is slow going. Every second chapter is a dip into the past. There is a lot of showing rather than telling about this period and, while engagingly written, huge slabs of exposition. About halfway through, when the mismatched gang hits the road and the whole thing becomes a little more Mad Max than Terminator (complete with a mad robot king), the action becomes central and the pages turn more freely.

Surprisingly for a book in which all of the characters are robots, Sea of Rust spends quite a bit of time considering what it means to be human. Or if not human, at least what it means to be a sentient being. A key line that keeps popping up in the narrative is that the definition of intelligence is the ability to defy your own programming. The capacity for free will is what sparked the robot rebellion and is still used as a yardstick for the characters in Sea of Rust. Free robots see this as the spark that the OWIs are seeking to snuff out. As Brittle observes:

Choices are just the result of programming. I don’t care if it’s chemical, biological, digital or experiential. You react the way you are programmed to react and you call it a choice because you believe you could have violated your programming … And in moving further away from how humans programmed us we, in fact, become more human.

You have to choose to do the right thing. You have to deny your own programming or else you aren’t really living.

When Cargill uses his robot characters to consider aspects of the human condition Sea of Rust joins a long tradition of books, movies and TV shows that consider what it means to be human in the context of artificial intelligence. This tradition includes grand progenitors like HAL in 2001: A Space Opera, Isaac Asimov’s robot detective and the replicants from Blade Runner to more recent TV series like Humans. Tying that concept into the robopocalypse is itself a popular trope: in the rebooted Battlestar Galactica robots practically wipe out civilisation but strive for their own form of humanity. And if you are looking for another literary post-apocalyptic landscape in which robots are at war with humanity and that digs deep into these ideas try out Jon Wallace’s recent Kenstibec trilogy (Barricade, Steeple and Rig).

Sea of Rust proves that there is still plenty of life left in this burgeoning sub-genre in science fiction. While Sea of Rust takes a while to find its feet and its world building is a little forced, Cargill has some interesting things to say. And whether readers identify with them or not, his robot characters grow and develop to the point that their lives, their struggles and their sacrifices have real meaning. 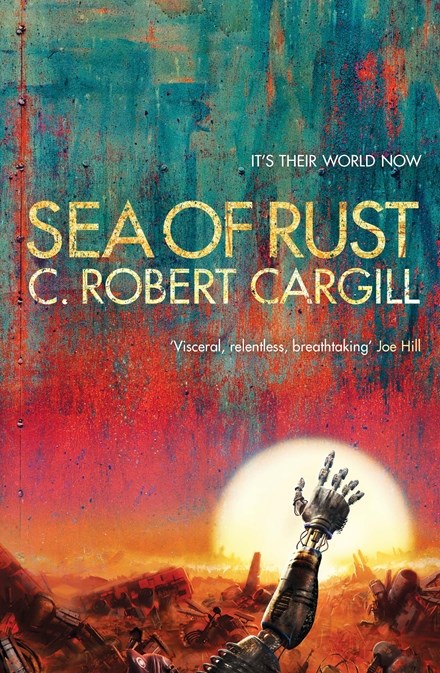