The English fantasy resurgence continues with the delightful and strange Rotherweird by Andrew Caldecott. A debut which joins the likes of Susanna Clarke (Jonathan Strange & Mr Norrell), Tim Clare (The Honours) and Padriac O’Donell (The Maker of Swans), as another uniquely and intrinsically English take on the genre without resorting to the tired or the Tolkienesque.

Rotherweird is a town out of time. Administratively cut off from the rest of England during Elizabethan times to hide a terrible and dangerous secret. The school’s history master disappears after illegally investigating pre-1800 Rotherweird history and strange forces are starting to rise again. The action is precipitated by the arrival of two new ‘outsiders’ to town. Jeremiah Oblong, the new modern history master, a typical English fop in the mould of Arthur Dent, and Veronal Slickstone, wealthy new owner of The Manor. They are surrounded by a colourful bunch of Dickensian characters with names like Orelia Roc, Vixen Valourhand and Sidney Snorkel.

The first half of Rotherweird is a delight. Not only doling out small hints of its fantasy setting but also full of comedic set pieces based on Rotherweirdian traditions including the annual coracle race down the river Rother where contestants dress up and anything goes. And the fantasy elements are intriguing including an alternate universe, strange hybrid creatures and a chequered history.

But as the action heats up the narrative slows down. Not content with hinting at the truth, Caldecott’s characters their time telling each other what is going on. And after all of that build up, the climax is a little too abrupt. But there are still enough, weird, joyful and inventive passages to make up for this. The final part of the book is the solution of the final mysteries and table setting for the sequel (this is the first of a trilogy). The future of British fantasy is looking bright. 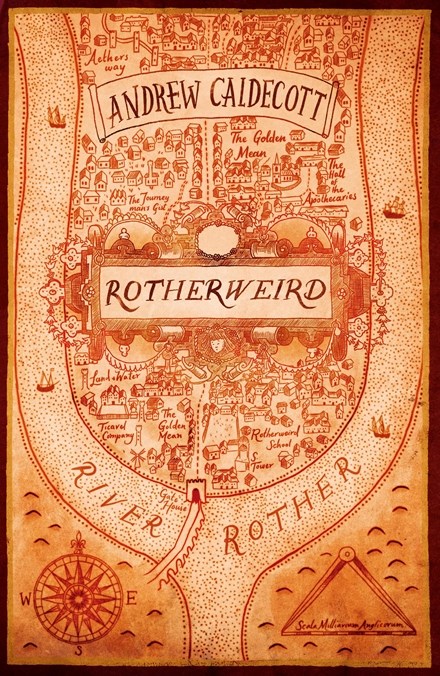