Yoon Ha Lee’s Ninefox Gambit was one of the most immersive, original and engaging science fiction books of 2016. It, deservedly, ended up on a number of award shortlists and heralded the arrival of an exciting new voice in the genre. But for all that, Ninefox Gambit felt a little like table setting for a much larger story. The heart of Ninefox Gambit was a military campaign around a particular station that had been captured by the enemy Hafn. This focus left a feeling of so much more of the universe and its various factions and races left to explore. But it was necessary table setting and while it takes a while to get accustomed to the Yoon Ha Lee’s universe in this first book it is an essential primer for the second.

Raven Stratagem starts straight after the action of Ninefox Gambit. In the first book, Kel General Cheris was bonded with the disembodied personality of a crazy but extremely effective long dead general Jedao. At the start of Raven Stratagem, Jedao, on the run from his superiors, is fully in control of Cheris’s body and uses his rank to take over a battle fleet. It appears that he wants to use the fleet to continue to battle against the Hafn, but his superiors do not trust him and for good reason. There are a number of layers at play.

While Cheris and Jedao formed the centre of Ninefox Gambit, Raven Stratagem has a number of points of view. In fact none of them are Jedao and much of the narrative revolves around how people react to him and respond to his actions. The larger and broader cast allows Lee to explore more corners of his universe from the high position of the ruling Hexarchate to the lowest shoplifter.

Raven Stratagem is still built around the unique calendrical and mathematical universe of different races and classes with differing abilities that were introduced in Ninefox Gambit. And much of the action and plot is built around understanding if not how they all work then at least the significance of these systems to the characters. Yet despite all of this strangeness there is a deep humanity in Yoon Ha Lee’s work and in his characters.

Raven Stratagem does not stun like the first book, the concepts are at least a little familiar and it is a little easier to anticipate how some of the action will play out. But it is in many ways a deeper book and fulfils the promise that Ninefox Gambit showed. While there are military engagements and this is in some ways more a political thriller, but one that only works with an understanding of the system. And just when you think you understand this universe, the finale shakes everything up enough to leave the reader wondering where this series will go next and excited about the prospect. 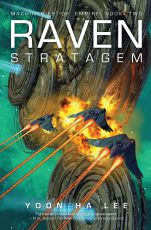