Another day, another literary Armageddon. While there are already a plethora of genre Post apocalypses (zombies, robots, diseases, environmental cataclysms), it seems that there is a conga line of ‘literary’  authors looking to get in on the act, some more successful than others. Recently, just to name a few, we have had  Margaret Atwood’s third in a Post-apocalyptic trilogy Maddaddam, Good Morning Midnight, a quiet contemplative apocalypse, The Fireman, a horror thriller style apocalypse, and Gold, Fame, Citrus, set in California and its surrounding desert. NK3, by Michael Tolkin, best known for The Player, most resembles the last of these. Set in and around a post-apocalyptic Los Angeles in the wake of a genetically engineered plague released by North Korea dubbed NK3.

NK3 is an inventive plague at least. Designed by North Korea to subdue the South by wiping the will of their enemies it has mutated and spread. NK3, now four years gone essentially reset the minds of anyone it came in contact with. They forget everything about themselves and become mindless drones. A method was developed to partially restore people and the process was used first on technicians and tradesmen to ensure things kept running. But those who were put through the process first determined not to help their benefactors and have taken control.

The centre of Los Angeles now sits behind a wall. Inside the wall are the verified, those who have been through the process and contribute to what is becoming a fairly bacchanalian society. They are served by drifters and driftettes, people affected by NK3 who have no memory of who they were and no way of developing new skills. At Los Angeles airport a rival group is trying to find a pilot to fly the last remaining jumbo, but it is unclear where it is they want to go.

NK3 might have sounded good as a concept but does not really work in the page. The narrative revolves around a number of characters who come in and out of each other’s lives in a way that seems fairly random. But given their mental state, random is probably the best anyone can hope for. It is difficult to care for characters who have had their skills and inner lives removed and stripped back to basics. And like the characters, the narrative really has nowhere to go. Tolkin’s premise leaves very little room to move and where it does create some hope, such as with the plane, he doesn’t follow the associated plot through to any definitive conclusion.

What NK3 demonstrates, above all, is that post-apocalyptic novels are tougher than they look to get right. And while they provide some scope for irony and satire of current society this is not enough keep reader interest. Michael Tolkin tries hard but fails to pull it off, painting a depressing world full of fairly hopeless, lost characters and very little else. 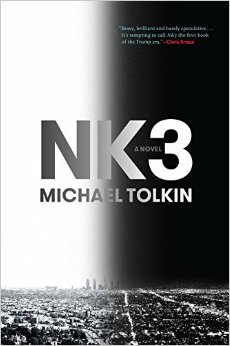