A few years ago, Adam Christopher had a fantastic idea based on a dare from a long dead author. Raymond Chandler, one of the greats of noir fiction derided science fiction. Out of his comment “they pay brisk money for this?” came Christopher’s short story Brisk Money, which itself morphed into the science fiction noir detective mashup novel Made to Kill. Made to Kill was set in the 1950s and centred on Ray Electromatic, the last robot in America, plying his trade as a private detective, only not. Ray’s handler, a computer called Ada, had reasoned logically that assassinations paid more money and so while Ray’s cover was as a detective his day job was an efficient killer.

Killing is My Business is a the second in a projected trilogy about Ray Electromatic. Early on, Ray’s first couple of hits go wrong, the first through apparent suicide and the second because his target has done a runner.  So Ray takes on another job, getting close to a mafia boss in order to find out his secrets before killing him. There is lot of set up here and then a huge leap of faith that the mafia boss would take Ray into his confidence after one event. And the fact that all of these plot lines come together should come as no surprise.

All of the familiar noir tropes are back – the femme fatal, the Hollywood setting, double and triple crosses. But the whole doesn’t work nearly as well as the first book. In particular, the plot device of Ray not having more than 24 hours memory and having to be reminded by Ada every day what he needs to know wears after a while.

Made to Kill was a fantastic conceit and Christoper’s handling of the both the noir fiction tropes and the retro fifties scifi feel were spot on. But it started to tire quickly and really felt like a one idea book. And that, unfortunately, is confirmed in Killing is my Business. 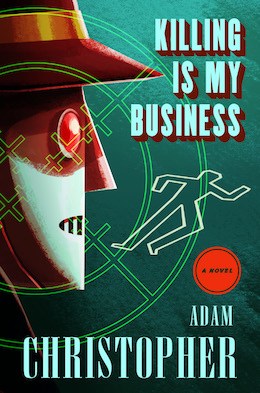