Another ‘Girl’ book, but this one is actually about a girl. When Danya Kukafka’s debut novel Girl in Snow opens, 15 year old Lucinda Hayes has been found dead in the local playground. The narrative that follows circles around her peers at the local high school and one of the policemen involved in the investigation.

The book opens with Cameron who in the opening lines remembers Lucinda by “her shoulder blades and how they framed her naked spine, like a pair of static lungs”. While this gives the impression that Cameron has a relationship with Lucinda it quickly emerges that this relationship is all one way. Cameron has been obsessed with Lucinda and has been watching her at night through her window, quickly making him a key suspect. Although never stated, Cameron comes across potential as having aspects of autism or at least some sort of mental health issue. Cameron was out the night Lucinda was killed and has a drawing of her dead body but, conveniently for the thriller aspect of the plot, has blackouts occasionally and in this case can not remember anything about the night itself.

At the same time, Jade, an old frenemy of Lucinda’s, takes an interest in the case and in proving Cameron’s innocence. Jade has problems of her own associated with being a not-popular teenager. Jade tries to make sense of her life by inventing a scenes from an imaginary film called “What You Want To Say But Can’t Without Being a Dick” in which she and the people around her get to say the things they want to say. And then there is Russ, a local cop, who also involves himself more deeply in the case partly as an old favour to Cameron’s father, his former police partner who left town many years before under a cloud, and partly because one of the other suspects is his wife’s ex-con brother who he would ideally like to see the back of.

While the murder mystery slowly unravels, Kukafka is more interested in the lives and reactions of her three protagonists than in the mystery itself. Each of them has deep secrets, some not even admitted to themselves, driving their actions. The resolution of these helps drive the mystery to resolution. Girl in Snow is set in small town, suburban USA and as with many small town murder stories, Kukafka is also interested in the way the townspeople react, come together and turn on each other as clues emerge and secrets are revealed. And there are plenty of secrets in this town.

Even though the crime takes a back seat to the character development, its resolution is shocking and the clues are well embedded into the narrative. Making Girl in Snow a solid crime genre debut some effective literary styling. 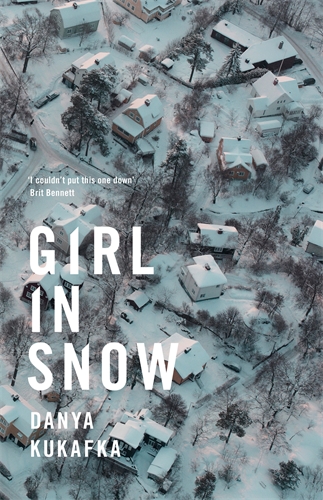