Dystopia has a long history in literary fiction. A breakdown in social order, or a reshaping of society, is a useful lens through which we can examine our own society and actions. So it comes as no surprise that Native American author Louise Erdrich is another in a long line of literary writers who have taken on dystopia.

The dystopian present creeps up slowly in Future Home of the Living God. The opening passage has narrator Cedar Hawk Springmaker – ‘the adopted child of Minneapolis liberals’ – heading to an Ojibwe reservation to meet her Native American birth-family. She does mention in this opening passage that ‘Our world is running backward. Or forward. Or maybe sideways, in a way as yet ungrasped.’ Cedar is four months pregnant but this is a secret that she has kept from her adopted family.

Of all the sections of the novel, Erdrich treats those on the Ojibwe reservation with a refreshing naturalism. Cedar arrives to find very few of her preconceptions of her birth family met. While she seems to have a very Native American name, her birth name was Mary Potts. Her mother is welcoming but not apologetic about Cedar’s life and her sister is a goth. A return to the reservation later in the book portrays it as a bastion of normality and safety.

When Cedar returns to her adopted parents, she finds society already moving out of control as the world starts to break down. Pregnant women are being rounded up. The staff at the hospital where she goes for an ultrasound help her escape undetected, despite the danger to themselves. But once Cedar’s pregnancy is visible she needs to find a place to hide. The remainder of the book follows Cedar as she attempts to protect her unborn child and survive in this hostile environment, where her choices are not her own.

While discussed by the characters, the apocalypse that brings on this state of affairs is deliberately, and sometimes frustratingly vague. At one point Cedar writes:

Evolution has stopped, says a talk-show host. In fact it may be going backward! If it is true that every particle that I can see and not see, and all that is living and perhaps unliving too, is trimming its sails and coming about and heading back to port, what does that mean? … Perhaps all of creation from the coddling moth to the elephant was just a grandly detailed thought that God was engrossed in elaborating upon, when suddenly God fell asleep. We are an idea then. Maybe God has decided that we are not an idea worth thinking anymore.

We agree that this whole development is a bitter triumph for secularism. Creationism bites the dust, big time … If evolution has reversed we will never know why, any more than we can know why it began.

Small events epitomise these changes. At one point Cedar thinks she sees a sabre-toothed tiger in a tree, in another she spots a winged lizard creature that might be an archaeopteryx. But this is not a science fiction novel, interested in the science behind this, and these physical changes to the world are barely explored.

Like many of the recent literary dystopias, Erdrich’s novel is more focussed on the agency of women and the centrality of procreation and pregnancy in the way they are treated by society. For recent examples you do not have to go any further than Margaret Atwood’s currently resurgent The Handmaid’s Tale and PD James’s Children of Men. In both of those cases, widespread infertility has detrimentally impacted on society and particularly on women.

It is enough to know that in Erdrich’s world pregnant women are being rounded up and brought to detention centres to have their babies. While this is a reaction to the global crisis, it is never really clear what happens to the babies and what the point of all of this is. It is almost as if this aspect of the new regime is not relevant. What is relevant is the way in which women, particularly pregnant women, are treated. In one scene Cedar witnesses a pregnant woman being arrested in a mall parking lot while her family tries to intervene. In another she hears of officers sent to hunt down pregnant women. Interestingly, it is not only ‘the authorities’ picking up pregnant women but also, at another point, a group of religious extremists.

On a completely different level, putting the dystopia aside, this is a novel about pregnancy itself. Cedar narrates the novel as diary entries to her unborn child. A fair amount of the narrative is dedicated to her recounting the progression of her foetus:

Little hominid, you are twenty-one weeks old. Five months. I have already felt you move. Your bones are hardening, your brain is hooked up to stereo – your ears. So you can hear me, you can hear my voice.

And in protecting herself and her unborn child, she does things that she would never have imagined. While living with the guilt of those actions, the reason for them helps her to carry on.

Another recent dystopian novel with this feel is Megan Hunter’s The End We Start From. In that book also, the crisis itself is left fairly vague. A baby is born at the beginning of a disaster but the narrative is as much concerned with the newborn’s development over the following year or two as with how her mother is responding to the world around her.

It is perhaps a little reductionist to categorise types of dystopian novels. While Future Home of the Living God may be described as ‘literary’, it takes many of its cues from the more mainstream genre pool of dystopian fiction. There are shady government agents; there is a jail break, a run for the Canadian border. So that, despite being a little light on detail, Future Home of the Living God successfully joins a long tradition of novels that explore current issues through a cracked, extreme reflection of our own world.

Future Home of the Living God be Louise Erdrich

Future Home of the Living God be Louise Erdrich 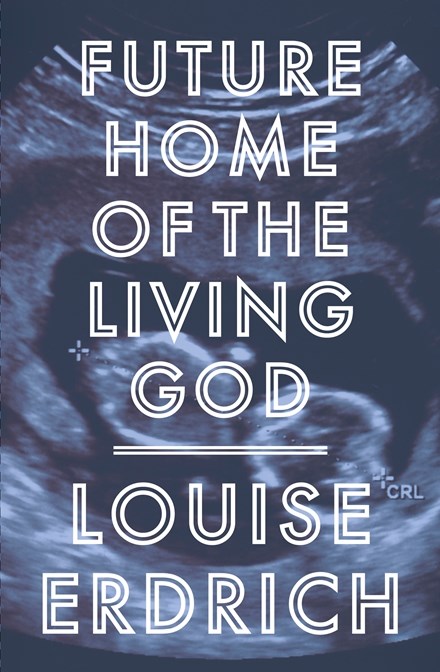