Sam Peters creates an offworld noirish detective story in From Darkest Skies. At first blush Koenig Rause, generally known as Keys, exhibits all the traits of a classic age detective. Thrown out of his job for some serious but unspecified misdemeanour, only in that job after fleeing his real job as an investigator, full of self loathing, crawling back to his old team to try and solve the case that made everything go bad. That case – the death of his wife Alysha in more than suspicious circumstances. So far, so noir.

The twist in this tale is that Keys is going back to the planet Magenta with an illegal robotic simulation of his wife in tow. Unable to cope with the grief, he has illegally constructed an artificial intelligence that looks like his dead wife and carries memories constructed from all of the public and private data he could make available. The real Alysha kept things from Keys about her work and as his new version has no access to private information, the AI cannot help him with those details.

From Darkest Skies starts on Earth. The early going in this book is tough, with Peters engaging in plenty of tell don’t show exposition. In a nutshell – some aliens came, killed lots of people and then distributed many of the rest across 37 planets for reasons still unknown. Keys himself comes from Magenta, an icy planet ironically settled mainly by Polynesians. Magenta is not all that hospitable – only a small equatorial band is inhabitable and even then the weather is shocking. And it sports a gravity 1.4 times that of Earth so that many people require a type of gene therapy and drugs to survive on the surface.

Keys returns to Magenta where he is given a small, slightly offbeat team which he enhances by taking on an old friend of his wifes. They are tasked with investigating the death of an heriess, killed by what was supposed to be a harmless recreational drug native to the planet. It is not long before this investigation and Keys off the book investigation into the death of Alysha five years before start to run into each other.

When the investigation finally kicks off, From Darkest Skies works as an effective science fiction police procedural mash up. There is the requisite evil corporation, departmental politics, personality clashes, a mysterious stranger who seems to be one step ahead and some interesting action sequences. And behind it all a much larger mystery. The problem is that there is much of Peter’s universe that is only vaguely sketched. So that the connections between Key’s investigation and the broader context of that universe, including why humanity has been scattered and what the evil corporations are actually trying to achieve is vague at best.

Comparisons have been made with Humans and Westworld, probably due to the existence of an AI character, the idealised version of Keys’ wife Alysha. But while it has an android character who is essential to the plot, From Darkest Skies is not really like either of these. It is its own form of hybrid robot, noir crime, space opera, corporate skulduggery story and when it works or when it doesn’t work it does so on its own terms. 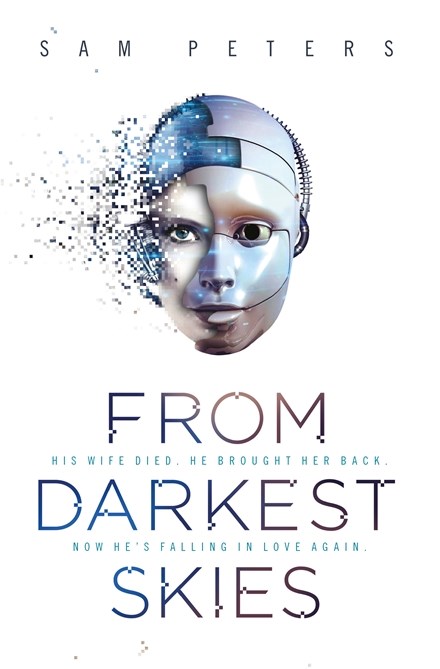