k Wendig ends his post Return of the Jedi series with a series of bangs. As one of the vanguard in the creation of the new official (Disney) Star Wars Universe, Wendig has tried to be true to the spirit of the now defunct expanded universe while strongly anchoring his narrative in the new Star Wars continuity. While it has taken a while to be become clear, what he delivers is a much deeper and longer endgame than has previously been apparent and some specific connections particularly to the action in The Force Awakens are revealed.

Empire’s End opens following the chaotic assassination attempts that closed out the second book in this series Life Debt. It is not long before hero Norra Wexley and her misfit crew have tracked the evil Rae Sloane and the remnants of the Empire. They find them massing around and dug in on a backwater desert planet called Jakku. Jakku is the home of Sloane’s enemy and now ruler of the remnant Empire Gallius Rax and is, as fans know, the location that opens The Force Awakens.

Desperate for revenge, and under heavy fire, Norra flings herself at the planet in an escape pod together with bounty hunter Jas and psychopathic but loyal robot Mr Bones. Being Star Wars, where this seems to happen all the time, despite landing randomly on a planet, they somehow end up just where they need to be. Meanwhile the rest of her crew escape and end up trying to convince the forces of the New Republic to attack Jakku (and save their friends). In doing so they end up helping Chancellor Mon Mothma and heavily pregnant Senator Leia Organa to navigate tricky and corrupt political waters.

Again, being Star Wars, the book, and the series, ends with a multi-faceted battle operating in a number of theatres and at a number of levels. While it takes a little too long getting there, Wendig successfully manages to keep a handle on a number of independent but intersecting plot lines and gives a great feel of the battle overall. But early on he plants the suspicion that, much like the Clone Wars before it, this battle is somehow not everything it is cut out to be.

As with other books in this series, fan favourite characters like Han Solo, Lando Calrissian and his offsider Lobot, bounty hunter Dengar and Admiral Ackbar all get short cameos. And various classic locales – such as Tatooine, Coruscant and Naboo – are once again briefly visited. So that Empire’s End, like the rest of Aftermath series, clearly has been written for invested Star Wars fans. Aside from the direct fan service, Wendig manages to use the action of these books to expand on and deepen a number of key elements of The Force Awakens. This includes the origins of the First Order, the birth of Ben Solo (aka Kylo Ren) and most important, how a super star destroyer ended up half buried in the dunes of Jakku. 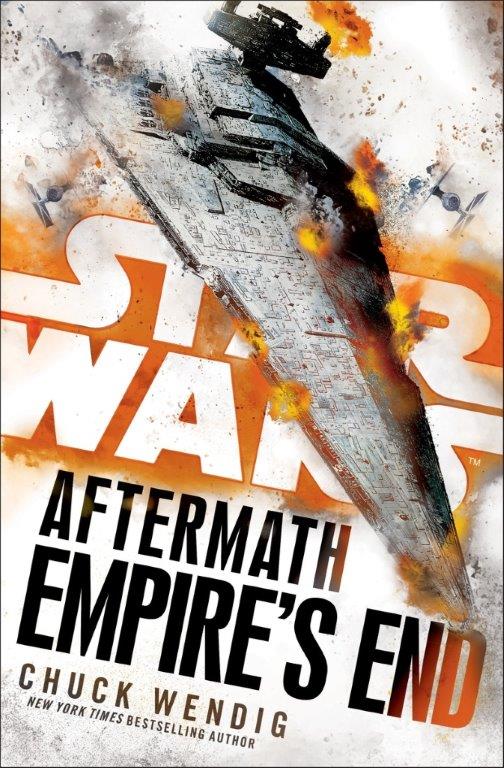