Sulari Gentill is best known for her historical crime fiction series starring Roland Sinclair. Set mainly in Australia between the World Wars, Sinclair mixes it with historical figures and solves crimes with the help of a gang of bohemian friends. Crossing the Lines is a long way from Roland Sinclair, a speculative fiction deconstruction of the crime genre and the writing process. But there are echoes of Sinclair as one of the main characters in this book, the crime author Madeleine d’Leon, has a long running historical crime fiction series set in 1916 about a crime solving domestic servant called Veronica Killwilly, and is also trying to break free of the shackles of the expectations that series has created.

So far so meta. And in fact Crossing the Lines is full of meta-moments and situations like this. The premise is that d’Leon feels compelled to write a new crime novel where the main character is a literary fiction author called Ned McGinnity. At the same time, literary fiction author, Ned McGinnity, decides to write his new literary fiction novel about a crime writer called Madeleine d’Leon. Gentill effortlessly segues between these two narratives as they bleed into each other and it is never clear which is  the author and which is the fictional creation (while both are of course both authors and fictional creations).

Neither the crime novel nor the literary fiction novel in this book, taken on their own, are pinnacles and their craft. But both are excellent vehicles for exploring the writing process, the conventions of genre and the relationship between author and character. Both narrators have close relationships with their literary agent (who is the same person in both novels), d’Leon attends the Sydney Writers’ Festival and hangs out with real Australian authors. Before long the two characters start to communicate across the fictional divide and talk not only about their personal situation but about their craft. For example:

[McGinnity] groaned. “Crime writers! Obsessed with guns and masked bandits. There are other ways to make a point…”

“I’m not sure what you’re talking about ,” [d’Leon] sighed. “But I guess that’s a literary tradition in itself.”

For all of its meta narrative tricks and telegraphed plot points, Gentill manages to generate a fair amount of tension around both situations. And as the two stories start to bleed into each other to a greater degree, both authors become increasingly obsessed with their creations. In doing this, Gentill manages to take what could have been written off as a purely intellectual exercise and invest it with real pathos.

So, while Gentill is returning to the world of Roland Sinclair, she has shown quite emphatically that she can leave Sinclair behind whenever she wants and go exploring in a wider literary landscape.

Crossing the Lines by Sulari Gentill

Crossing the Lines by Sulari Gentill 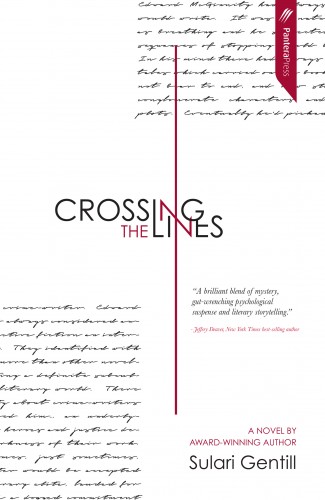