Angela Slatter’s debut novel Vigil was a great mix of noir detective and urban fantasy genres. Her main character Verity Fassbinder had one foot in each of the Weyrd and Normal communities of Brisbane and so was used as an investigator and enforcer for the Weyrd community. That book ranged over a number of interconnected mysteries, some of which connected directly to Verity herself, putting her in the firing line. The follow up, Corpselight, takes a similar approach, although everything is a little more connected here, and is just a successful.

When Corpselight opens, Verity is eight months pregnant, and the pregnancy has robbed her of her usual powers of super strength. Despite this, Verity is getting on with the job, investigating strange occurrences on behalf of an insurance company that pays out for “unusual happenstance”. At the same time she is also investigating a series of strange dry land drownings for the police and being harassed by fox-girl assassins known as kitsune. When one of those attacks bring on her labour and she is saved by a mysterious stranger, the plot comes even closer to home.

Verity Fassbinder continues to be a great character. And in Corpselight Slatter really digs into Verity’s inner struggle as she deals with becoming a mother and has to juggle family responsibilities and her work. Everything Verity does has consequences, events from Vigil haunt her and deals she makes in Corpselight also partially reset things for the next installment. Slatter also provides some welcome backstory and some interesting beats for the supporting cast including Verity’s trusty driver Ziggy.

For the most part, Corpselight is a well mix of crime and fantasy. Towards the end, when the crime element is resolved, and it become purer urban fantasy the pacing drops off a little. More than anything else, besides illuminating a key aspect of Verity’s character,  this final section is more to set up the cliffhanger for volume three.

This a series that is starting to mix it with some great urban fantasy/crime genre mash ups. Series like Ben Aaronovitch’s PC Peter Grant series and Jim Butcher’s Dresden Files come to mind. So that the third volume can’t come soon enough. 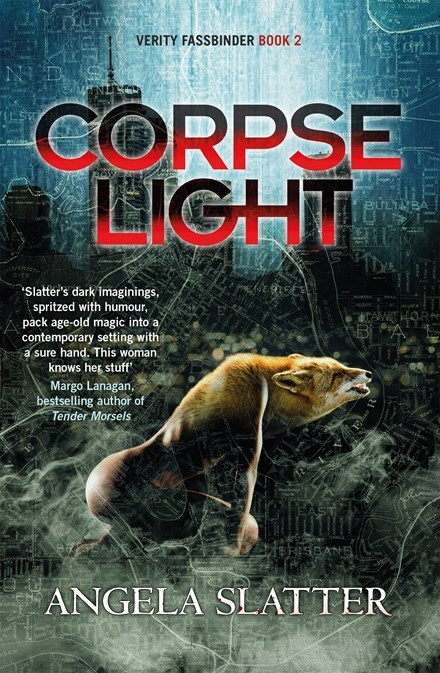