Stewart O’Nan explores the world of terrorists and terrorism in a historical context in City of Secrets. Set in Jerusalem in 1946, O’Nan focuses on the exploits of Jewish resistance fighters, working to end the British Mandate of Palestine.

The central player in City of Secrets is Brand, a Lithuanian survivor who lost his wife, parents and sister in the Holocaust. Brand only survived himself due to his mechanical skills and a survival instinct that saw his fellow prisoners die while he stood by, a failure that still haunts him. Washing up in post-war Palestine he joins the Haganah, a group of Jewish resistance fighters and takes on a false identity as Jossi, a taxi driver in Jerusalem.

The Haganah was a more moderate resistance force and had joined with the British during World War Two, while the more extreme groups Irgun and Stern Gang continued their bombing campaign. Now, with the war over and the British turing away Jewish refugees, Brand and his fellow activists are drawn into the Irgun. As the violence of their campaign escalates so do the risks of getting caught. At the same time Brand is in a desperate relationship with Eva, a fellow survivor also living with deep loss and fellow cell member. Eva attains her intelligence as an escort to high ranking British soldiers and Brand drives her to her assignations.

Brand is a complex and tortured soul – deeply scarred by his personal losses and his experiences in the War and both excited and repelled by his secret role – he is the perfect guide to this morally grey world. Brand is constantly trying to reconcile his need to find a place for himself with the increasing demands on him to be involved in violent activities. Part of him wants to be involved in daring rescues and critical actions to atone for what he perceives as a lack of action when he was a prisoner. But another part just wants to settle, to have life with Eva, no matter how much she keeps him at a distance.

City of Secrets is a beautifully crafted novel with that effortlessly conveys a sense of time and place. While Brand and his fellow travellers are fictional, the real exploits of the organisations they belong to are based on historical record and intricately woven into the plot. And while this is a purely historical novel, echoes of current events, the questions of the line between terrorist and freedom fighter, are never far from the surface. 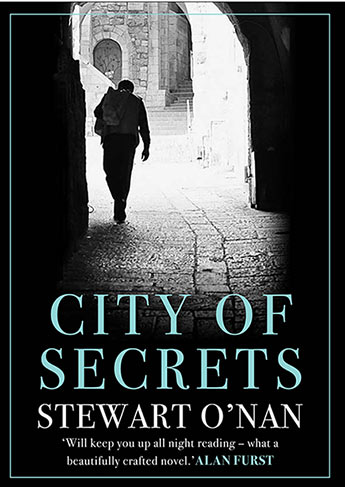