Chris Womersley’s first novel, The Low Road won the Ned Kelly Award for best debut crime fiction. His second novel, Bereft was short listed for the Ned Kelly for best crime fiction and while it didn’t win that award it did go on to win a slew of others that year. But Chris was never going to let the trappings of genre (not that either of these two books were classic crime genre) hold him back. Now, with his fourth book, City of Crows, Womersley takes a sharp turn away from anything he has done before. And the results are no less impressive.

Set in 17th Century France, City of Crows opens in the village of Saint-Gilles. Charlotte Picot has already lost three children and has a young son surviving when her husband dies of plague. She flees the town with Antoine but he is kidnapped while they are on the road. Charlotte is wounded and in the book’s first detour into the occult, ends up being healed by the local witch. At the same time Adam du Coeuret, a galley slave imprisoned for practicing magic is unexpectedly freed and renames himself Lesage. The two end up travelling together to Paris, the City of Crows, to try and find Antoine.

City of Crows is an historical novel rich in detail. From the plague riddled countryside to the crush and smells of 17th Century Paris. Womersley constantly switches between the point of view of Charlotte Picot, a country mouse at sea in the city, and Lesage, a city dweller originally from Brittany who still marvels at the grandeur of his adopted home. Many of the characters, including Lesage, are also historical, giving a further layer of verisimilitude to the text.

In its dealing with magic, City of Crows has an ambiguous fantasy element. Lesage uses tarot to tell fortunes and while he does not quite believe his powers, his predictions start coming to pass. Charlotte Picot believes that she has some magical power, passed on to her by the witch who healed her and contained in a book of spells. Many of the actions that she takes and their outcomes may have a reasonably explanation, but when seen through her eyes, and the eyes of Lesage, may also well be magic. Womersley is particularly interested, in this aspect of the book, in the power of belief and the lengths that it can take you. As her belief in her own power grows, not only does Charlotte’s self-confidence but also her willingness to go to lengths and depths previously unplumbed to secure the return of her son.

City of Crows is an unpredictable book, and yet each twist and turn is completely understandable in the context of its characters. Womersley immerses readers in 17th century Paris and based as it is around the ultimate quest – to track down and retrieve a stolen child – also manages to craft an engaging tale that builds to a startling and fittingly ambiguous conclusion. 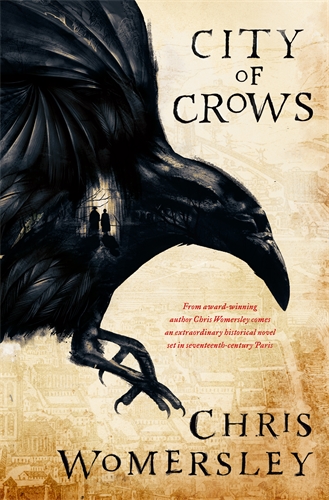