Lavie Tidhar, an Israeli-born author living in London, has won acclaim and more than one award for his fantasy novels. Central Station, his latest novel, is straight down the line science fiction and was shortlisted for the 2017 Arthur C Clarke Award. Central Station explores the lives of a group of connect characters who live in and around a launch pad for intersolar travel in the middle of a future Tel Aviv. The front of the novel has a map of the area but the action never strays far from the base or the insides of the Station itself.

The story opens with Miriam “Mama” Jones who runs the local shebeen and her adopted vat-grown son Kranki, who come to wait for the passengers of the ships that dock at the Station. When an old lover and friend, Boris Chong, returns to Earth to see his dying father a chain of events is kicked off which reveals a little more about their world.

Despite the setting being constrained to the world just around the Station, Tidhar manages to use this as an entrée to a much broader universe that includes settlements on Mars and throughout the solar system. This includes, much like the Belter tongue in The Expanse, an Asteroid Pidgin which is used sparingly and always translated. But he also gives a great feel for the griminess and sights and smells of a future Tel Aviv. Central Station might be spaceport but its surrounds are much like any other major transit terminal.

But Central Station is not a traditional narrative. While there is the thread of a story running through it, it feels more like a collection of short stories. Different characters star in most of the chapters which also deal with either their own or a related backstory. But the characters are all connected either through family or other ties and all live within a small boundary so drift in and out of the narrative.

Tidhar uses these stories to explore a number of well worn science fiction tropes – humans interconnected through a system called the Conversation, virtual reality, cyborgs created to fight global wars, sentient artificial intelligences, a robot religion (complete with robot priest), and a data vampire. But he manages to make this exploration in a humanist way and a way that is relevant now,

despite the science fiction stylings. Each of his characters, despite their short time in the spotlight are interesting and so it does not matter that many of their stories do not quite resolve.

Central Station is at times more soap opera than space opera, with the various interconnections between characters. With the exception of a military flashback it contains few of the big action or big idea set pieces of books of this type. Instead it is often quiet and contemplative, similar in that way to Becky Chambers’ recent novels. And all the better for that. 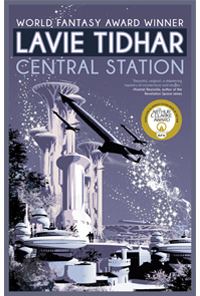