Australian gothic has a long history in Australian fiction – both written and visual. Think of books (and films) like Picnic at Hanging Rock and Wake in Fright or more recently The Dressmaker and you start to get a sense of this genre. It is a particularly European take of the Australian landscape, a dark, dangerous view full of strange characters and potentially evil goings-on. But it is also used to illuminate the dark side of Australian culture. In The Dressmaker there was bullying and corruption, more recently Holly Throsby’s Goodwood had elements of Australian gothic and delved into domestic violence, alcoholism and gambling. Cassandra Austin’s debut All Fall Down sits squarely in this tradition but feels in no way derivative of its predecessors.

The town of Mululuk somewhere in the desert north of South Australia, an opal mining town spitting distance from Lightning Ridge, is separated north and south by a chasm. As All Fall Down opens, the bridge that connects the two sides of town collapses, severely injuring Janice who was driving over it while fleeing her husband and baby to see her lover Shane. Weeks later Janice is still in hospital having been in a coma and a new bridge has been built but it cannot be used until the cause of the original collapse is known. Teenager Rachel comes in to town with her greyhound Moustache to stay with her uncle, the local priest. She finds herself in the middle of the conspiracy theories surrounding the bridge collapse and the dangerous love triangle that exists between Janice, her controlling husband Craig and Shane.

All Fall Down is full of the kind of weird characters and strange rituals that seem to populate many Australian literary country towns. Among the cast is Gussy, the town busybody, trying to whip up a search for the saboteur who brought down the bridge, Rachel’s uncle Father Nott who is planning a demonstration which he calls “The Transgressus” to force open the new bridge and Charlie, the old drunk who has a history with Gussy and insists that the new bridge will not be able to be opened without a human sacrifice. As for rituals, in Mululuk no one goes in to anyone else’s house, most social transactions taking place through the screen door on the porch.

While Austin brings home the almost Mad-Maxian desert vibe, her characters never quite land in caricature. She manages to generate a fair amount of pathos from them, despite the extremity of her scenarios. And those characters manage to shine, particularly in the long set pieces such as a dinner party for Gussy’s birthday and the dust-storm affected climax.

There is little of the indigenous in All Fall Down, but this is not unusual in Australian gothic. The tension comes from an outsiders’ relationship with the land and the landscape and the idea that with one wrong step the land itself will take its due. This is a poetic, sometimes disturbing debut and one that adds a unique voice to a long running and very Australian tradition. 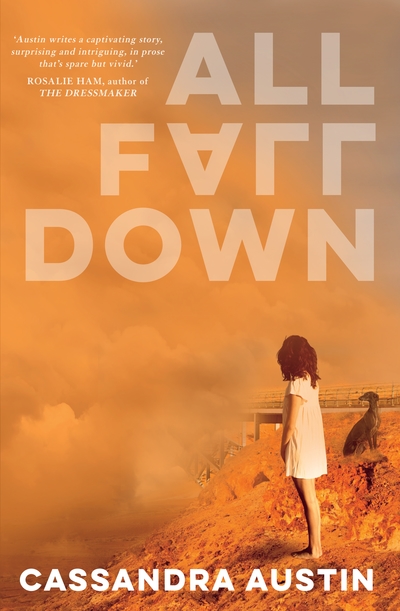