Seventeen year-old Paul’s brother Eliot has gone missing. Paul, is unsure how to react but wants to find Eliot and, not knowing what else to do, packs up and follows in his brother’s footsteps. Eliot had been working on his uncle’s crayfish trawler operating out the West Australian coastal town of Stark so Paul follows. At the same time as following Paul’s life, Carmody charts the journey of a group of bikies across the country. Led by The President and narrated by a character called Swiss (after the army knife), the group flee from a bust in Sydney, heading west across the desert to exact some form of unspecified revenge.

Besides Paul, Carmody gives some insight into the lives of the people who drift in and out of towns like Stark. The people who work on the trawlers, those running from some aspect of their lives, and the tourists from Perth. It is a very human, sometimes light but often bleak view of these lives that encompasses some part of what could be considered a specifically Australian experience.

Carmody has a deep feeling for and knowledge of the sea and this comes through in Paul. Most of the imagery, from the obvious work of the trawler to a description of the denizens of the local pub to Paul’s first sexual experiences are all illustrated with the use of oceanic metaphors. Sharks, both real and metaphoric also lurk throughout the text.  But it is when Paul is out on the water or by the sea that Carmody really shines. Paul’s first trip out on the trawler is a visceral experience for the reader:

“He looked beyond the twisting mouth of the river, past the white boil of the inshore reefs and out to the shadowy scowl of the horizon…” And later “He could see the arms of kelp strewn across the surface of the sea, torn from the ocean floor. Swells glinted like knives turned to the sun.”

And this, from later on the novel:

“Waves foamed around his ankles, cool. His breath went as each churning wall hit his legs and waist, the waves small but loud, rumbling from within, whooshing and sighing as they passed.”

Carmody is able to bring depth and subtlety to the town of Stark and its denizens and particularly to Paul. But this is also, at its heart, a crime novel, and Carmody keeps a firm grip on a plot that brings the two story strands of the missing brother and the bikies’ quest together cleverly. The Windy Season would have been a strong contender for the Vogels. It is a sometimes violent, sometimes dangerous, sometimes poetic and insightful debut Australian novel. 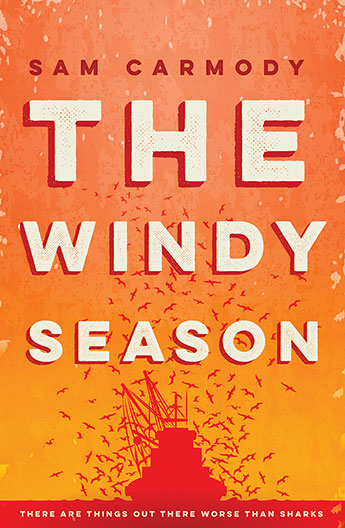