Thinking about it afterwards it was kind of obvious that pairing new weird novelist China Miéville and with surrealist movement was perhaps inevitable. The Last Days of New Paris not only celebrates Surrealism but brings it to life in a way that only the imagination and verve of Miéville could possibly achieve. New Weird and Surrealism, a match made in heaven, which, of course, as this book posits, also implies the existence of Hell.

It is 1950 and, as a result of the detonation of an occult weapon in 1941, the war still rages in Paris. The bomb – “the weaponised soul of convulsive beauty” – made real the Surrealist dreams of Europe on the streets of occupied Paris. The landscape of Paris has been remodelled in line with a Surrealist thought experiment and manifestations of Surrealist art (known as ‘manifs’) wander the streets. To stop this strangeness spreading, Paris has been walled off from the rest of the world and so the Second World War rages on between the Germans and the French on its streets. The story centres on Thibault, a member of the surrealist resistance, who is caught up in stopping a German plot to harness the power of the manifs and win the war.

The Last Days of New Paris is another spectacular example of Miéville’s style. Told from the perspective of (possibly) our own reality, Miéville creates a visceral, mind blowing vision not only of a city at war but also one that explores the transformative power of art. The main story can be enjoyed without resorting to the copious endnotes. But quick references to these notes and a handy web browser to display images of the original artworks referenced definitely help. Miéville knows not to outstay his welcome and the tale, though fairly short, is as long as it needs to be to blow the reader’s mind.

The Last Days of New Paris by China Mieville

The Last Days of New Paris by China Mieville 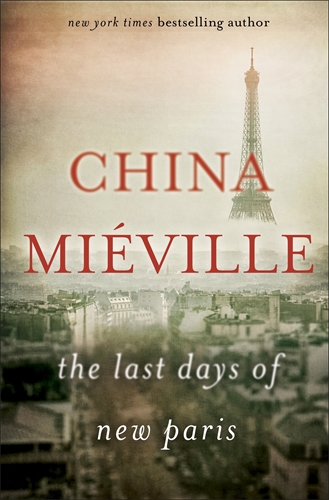