Den Patrick concludes his Erebus Sequence with more of what made the rest of this series so enjoyable. Plenty of sword play, a little bit of politics, great dialogue and characters to care about, even if you disagree with what they are doing. The series, which started surprising with The Boy with the Porcelain Blade (reviewed here) and continued to impress with The Boy Who Wept Blood (reviewed here), has been a welcome reprieve to the often cookie-cutter worlds of epic fantasy. The finale is no exception.

It is difficult to talk about the plot of The Girl on the Liar’s Throne without giving away some of the key plot points of the earlier novels. While The Boy Who Wept Blood advanced ten years on the first volume, this book opens only months after the events of that instalment. Anea, the Silent Queen of Landfall is in the oubliette, a dungeon in which the waters erase memories. On her throne is an imposter, Eris, under the sway of the mysterious Erebus and undoing all of the good work that Anea had started.

This is again a shift for this series which has focussed on a group of Orfino, strange hybrid creatures created by the now dead mad King. All have been, to some extent coming of age stories. The first book focussed on Lucien and was told partly in flashback to his childhood. The second followed his Orfino brother Dino, now older than Lucien was in the first book, but also coming to terms with his responsibilities and sexuality. Anea is the third of the original trio, the youngest of the three but in many ways the toughest and least sympathetic. She too needs to come to a more mature understanding of herself and her actions. This is particularly as the situation that her world finds itself in when the book opens, including her own imprisonment, is partly of her own making.

While the narrative takes a few interesting point-of-view diversions to further the plot, it is essentially split between Anea, who escapes and gathers her forces, and Eris who starts to confront the reality of her situation as puppet queen. The plot winds carefully around these two working sometimes to achieve similar ends, sometimes at cross purposes, building to a lengthy, well handled epic confrontation.

Still fascinating, is Patrick’s gothic city of Demsene with its tunnels and rooftop passageways, and the broader Italianate world of Landfall. But Patrick has avoided detailing the history of Landfall. Readers have to take the world as they find it – the Italian Renaissance setting, the strange hybrid creatures, the ancient machines of unknown provenance now fallen into disuse. How Landfall society came to this point is a tale left to the reader’s imagination.

After penning a series of books involving elves, dwarves and orcs, Den Patrick has delivered all of the elements of classic fantasy – swords, politics and a streak of weirdness – without being derivative. The Girl on The Liar’s Throne is a satisfying and enjoyable conclusion to the Erebus Sequence and stakes a real claim to originality in a fantasy genre full of imitators and wannabes. 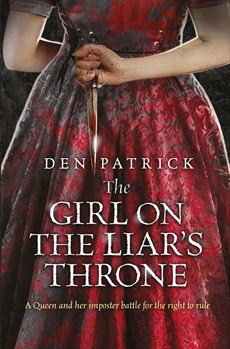