Retrofuturism is an area of sci-fi with proliferating sub-genres. First there was steampunk, Victoriana sci-fi usually replete with airships, flying goggles and cogs. But now other time periods are muscling in on the act. There is clockpunk, based on an area before a steam. But there is also dieselpunk and atompunk taking the retrofuturistic baseline deep into the twentieth century. Catherynne M Valente’s latest novel for adults Radiance (she has been spending much of her recent time writing for children about a Fairyland of her own making) is self-described as decopunk. Decopunk replaces Victorian crinolines and grime with the high fashion and flashy chrome of the Art Deco era. Also sometimes known as raygun gothic, decopunk is flashy, pulpy and overall lighter than its steam-driven cousin.

Radiance is more than just retrofuturism, though. Valente has created a complete alternative not only of our world but of our solar system. In the Radiance universe, all of the planets and many of their moons are both habitable and inhabited (including Pluto which in our universe was not even discovered until 1932). People zip between these strange and unique environments in rocket ships. They survive partly due to their reliance on a substance called callowmilk, harvested from the extremely mysterious callowwhales which bask in the seas of Venus. The best advice at this point is to just go with it. Valente’s universe eventually makes its own kind of sense.

The plot centres around the disappearance of documentary filmmaker Severin Unck, daughter of famous movie maker Percival Unck. Percival is part of a massive movie making enterprise, turning out pulp movies from studios based on the Moon. Severin took a different path from her father – working as documentary film maker. She was filming a documentary about the unexplained disappearance of a whole town on Venus when her crew were beset by strange events and she eventually disappeared. Many years later the mystery persists and her adopted son searches for answers.

More than anything, Radiance is a love letter to the golden age of movie making. The closest to it in terms of this aspect is not science fiction at all but the Coen brother’s latest film Hail, Caesar. Valente tells her main story in a range of different movie styles – noir, gothic horror, children’s fairytale and parlour mystery. Each section is done with a narrative verve and stunning brio. These sections are separated and deepened by other aspects of the tale told through a range of other devices – scripts, interview transcripts and diary entries.

Radiance is not going to be a book for everyone and some hard core sci-fi fans are likely to be a little bemused. But like most great modern sci-fi and fantasy, the trick with Radiance is to just go with the flow as the setting becomes more familiar. Valente builds a fascinating and beguiling universe with enough connections to our own reality to be recognisable and enough difference to be endlessly fascinating. And its deco styling and heart make this a book for anyone willing to take the trip.

Radiance is filled with spectacular literary gymnastics but has an emotional core running through it. And just like the best of gymnasts, Valente sticks the landing. 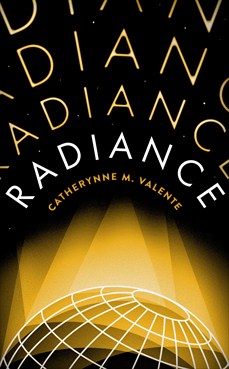