Chuck Wendig takes a break from the Star Wars universe to delivers an X-Files meets Michael Crichton thriller Invasive. Ostensibly a sequel to 2014’s Zeroes, no familiarity of the previous volume is required.

Hannah Stander is futurist who consults to the FBI. Her job is to try and see into the future, one she divides neatly before the action even starts as an apocalypse versus apotheosis or evolution versus ruination scenario. The idea here, not a new one, is that technologies and technological advances are neither good or bad – the issue is what humans make of them. Hannah is called in by her FBI handler Hollis Copper when a body is found seemingly skinned alive by thousands of genetically engineered ants. The ants contain a patented genetic marker of a company run by Einar Geirsson “billionaire contemporary of Elon Musk and Steve Jobs (maybe even Iron Man’s Tony Stark)”. This introduction an early indicator that the reader is pretty much in comic book territory.

Hannah ends up on a remote Hawaiian atoll, openly invited by Geirsson to investigate his company on the basis that he has nothing to hide. But pretty soon the killer ants are on the march and Hannah has to do everything in her significant powers to stay ahead of them and work out who is actually behind them.

This is pretty much a paint by numbers techno-thriller. Plenty of redshirt characters fall to the killer ants early on and then it is a matter of picking the traitor from the remaining bunch. Quick flashbacks to her childhood with a pair of survivalist parents give some context to Hannah’s resourcefulness but she is otherwise a fairly standard action heroine. And the twists are all fairly predictable if completely unbelievable.

As noted above, this is Wendig pretty much in comic book territory. Moustache twirling villains, black clad evil commandos, a plucky heroine and her straight FBI handler, an unstoppable biological menace. Michael Crichton’s Jurassic Park gets referenced directly by the characters when they realise that they have walked into a variant of one of his stories, but even this level of meta awareness is unable to save either them or the novel. 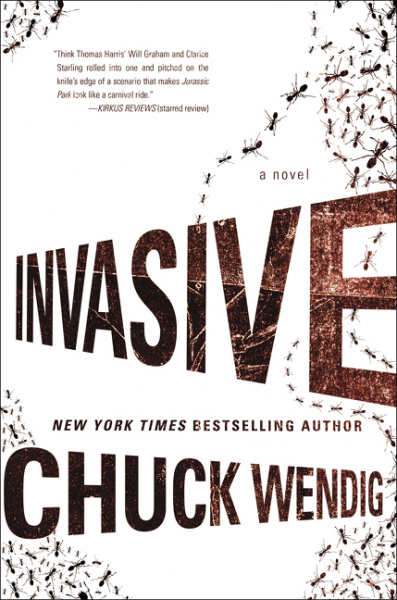