Chris Cleave opens his forth novel with a sentence that sums up his main character: “War was declared at 11:15 and Mary North signed up at noon”. Mary does not get what she expects, ending up in the teaching service and helping to evacuate children from London to the countryside. Mary is just one of the rounded and unforgettable characters in Cleave’s new novel set in the first half of World War Two. But she is the heart and soul of this work – a jaunty but fierce, undaunted young woman trying to find her way in a world that is coming apart around her.

Mary is not the only character that Cleave follows into the war. There is Mary’s best friend Hilda, her new boss Tom, who is happy not to fight, and his friend Alistair Heath, an art conservator with the Tate who has gone to war and ends up defending Malta from the Germans. Also trying to survive the war is ten year old American boy Zachary. Zachary is African American and does not fare well when evacuated to the country with the other children. Zachary ends up back in London during the Blitz with his father who performs in the popular Minstrels shows.

There has been plenty of fiction set in and around World War Two, and the Blitz in particular, but Cleave takes this setting and the era and makes it feel new again. He does this by not trying to tell a story about the key players or bigger pieces of the war. Instead, he focusses on ordinary people and their experiences highlighting universal themes if love, loyalty and sacrifice. Cleave particularly shines a bright light on the casual and inherent racism of the time and the bigotry that persisted even when the world was at war.

Everyone Brave is Forgiven is stunningly written and constructed. The ways in which Cleave describes London before and during the Blitz dazzle, as do his very different descriptions of Malta, a lesser known theatre of the Second World War but one to which Cleave has a personal connection. Cleave portrays the randomness and futility of war in ways that often take the breath away.

The dialogue is witty but also insightful. Perhaps that was just the way that everyone talked in the 1940s but if there is any quibble it is that the dialogue is uniformly excellent. All of the main characters and the supporting cast, from the commanding officers on Malta through to the servants and children made homeless by the Blitz, tend to speak in a similar register.

While no thriller, Everyone Brave is Forgiven is a page turning read. Cleave manages breathe life into his characters. He makes the reader smile and ache for them, sometimes simultaneously, and need to know what happens next. This is a beautiful, sometimes horrifying, often heartbreaking journey into war and is destined to be one of the books of the year.

Everyone Brave is Forgiven by Chris Cleave

Everyone Brave is Forgiven by Chris Cleave 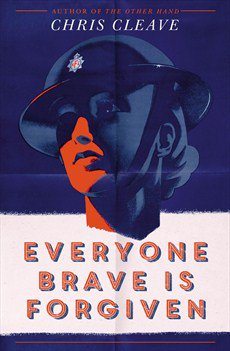