Natasha Lester’s latest novel takes readers into the heart of Jazz Age New York. Despite the promise of the title, F Scott Fitzgerald does make an appearance even as a cameo, although a few historical figures appear or rate a mention. The reference to Fitzgerald in the title, dropped fairly heavy handedly at the beginning of the novel, is the idea of the more modern woman, unshackled from the Victorian mores that pervaded American society through the early twentieth century.

Evie Lockhart, the protagonist takes this approach to life to heart. After being unable to save a woman in childbirth, she determines to become an obstetrician despite all of the pressures on her to not even apply, never mind succeed. Evie joins the Zeigfried Follies to fund her way through medical school, despite an undertaking to the school not to do anything to bring it into disrepute. At that time only one woman had graduated from medicine and was not celebrated for her achievement. Evie’s struggles to succeed against a disapproving establishment and its escalating attempts to remove her, coupled with her double life as a singer and dancer is one of the highlights of this novel.

Lester has other serious issues in mind. She uses Evie’s work in obstetrics to explore how doctors of the time medicalised the process of childbirth and some of the negative consequences of that approach. While attitudes have moved on from the 1920s, this is an issue that is still has plenty of relevance.

Another highlight of the novel is Lester’s feel for New York of the time. From the mansions of Fifth Avenue down to the women’s only boarding house in Greenwich Village. From the high class parties to the speakeasies and everything in between. Lester brings 1920s New York vividly to life.

Driving the plot, though, is a romance and a secret tied up with the child that Evie saves at the beginning of the book. The romance element, between Evie and Thomas, the brother of the man she rejects early on in the novel (complete with his attempts at moustache-twirling revenge which include marrying Evie’s sister) is obvious and a little hackneyed. As a means for exploring the deeper themes of the novel around how women were treated at the time, though, it works. But it always has that element of wish fulfillment and an obvious through-line, despite the road blocks that the narrative throws up. The secret surrounding the child seems a little too obvious but plays out in a much less predictable way.

Overall, A Kiss From Mr Fitzgerald is an enjoyable romp through a fascinating time and place. The romance element, while running along some well worn tracks, is well handled. And it serves to underpin a focus on how women were treated in society, by the medical profession and in the workplace. These wider themes give what is already an engaging story both relevance and resonance. 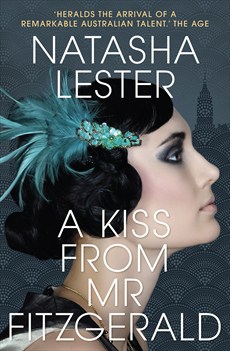